The safety performance of employees can be managed and evaluated by a conscientious company.

Part I of this series showed how ownership and moral choice can bridge the gaps of compliance, but how can we effectively manage personal behavior and gauge progress on the shop floor?

For one, the authors believe every person can be objectively placed into one of three behavioral categories all can agree on, including the persons themselves.

This can be done through fact-based evaluation of their actions over time.

1. Safe Behavior Is Unacceptable.
For a team member in this category, proper behavior is unacceptable when it is inconvenient for any reason. There may be a faster, easier or just a more preferred way. In any case, someone in this category cannot be counted on to do the safe thing in the absence of oversite or with little chance of being caught. We can also call this category Non-Compliant.

2. Safe Behavior Is Acceptable.
A team member in this category is willing to follow rules whether someone is watching or not. In most compliance-based programs this is often considered the highest level of behavior. But consider what’s left out. If the rules are insufficient, incomplete or just wrong, they will still be followed. If this employee is told to do something unsafe by their manager, they are unlikely to question it. Also, following the rules applies only to them. If a coworker is about to do something unsafe, it’s the other person’s concern, not theirs. This category can also be called Compliant.

3. Unsafe Behavior Is Unacceptable.
For this team member, acting unsafely is never an option. They will speak up any time they see a hazardous situation or a coworker about to put themselves in harm’s way. And they will speak up even if it creates discord, discomfort or disapproval. They do this because it is the right thing to do. This is a team member who acts out of their highest opinion of themselves. This can also be called Ownership.

A team that fully understands these definitions and operates in an environment of high trust can, based on real observations of behavior over time, confidently and objectively place every employee into one of the three categories. It is helpful to let the person’s direct supervisor start the evaluation and allow their peers and other managers to challenge or support the assessment, careful that each comment is fact-based. When done properly, a person may not like the category in which they are placed, but it will be difficult for the team member to disagree. Newer employees who have not established a history should be placed in the lowest category (non-compliant) until they demonstrate, through their actions, they belong elsewhere.

It is useful to color-code (red: non-compliant, yellow: compliant, green: ownership) on manning charts as a visual aid to quickly identify where management attention is needed. It is also helpful to graph the distribution of the entire organization to better determine the current state of the safety culture. The three distinct stages are illustrated in Figure 1. 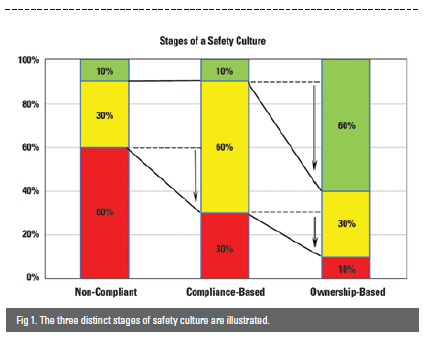 An organization with a majority in the non-compliant (red) category likely places little emphasis on safety, believing it is the employees’ responsibility to comply with safety rules. Team members may be undertrained, have improper tools or procedures to work safely, or not understand the significance of the rules. Some will be effectively compliant (yellow) simply out of concern for their personal well-being, but fewer than 10% will demonstrate ownership (green) and watch out not only for themselves but for coworkers, as well. If you have a similar distribution to this, your program is largely non-compliant and can be expected to have incident rates well above the national average. Frequent occurrences of significant injuries and/or fatalities describe your world and affect the bottom line of an organization.

When an organization decides to take safety seriously, they typically focus on compliance and you will see a distribution similar to the middle figure. A majority of team members will fall into the compliant category, but a significant portion will remain non-compliant. Those are either “good” employees who take shortcuts to get the job done, or bad actors who have been deemed minor violators. In short, compliance hits an inevitable ceiling because we don’t expect team members to be responsible for themselves, so they are not. Ownership remains low because the “ownership” focus is no greater than in non-compliant systems. If you have a distribution similar to this, you can consider your program largely compliant, and incident rates will be close to and even below industry average. However, you can still experience significant injuries.

As the organization moves toward ownership, the distribution will change again. A majority will find unsafe behavior unacceptable, both for themselves and the people around them. The influence of this majority will make it uncomfortable for others to stay in the compliant category. Non-compliance will not be tolerated.  The non-compliant are either new or in danger of leaving the organization; there are no long-term employees in this category. This distribution denotes a largely ownership-based program.  Incident rates will be in the top quartile, and significant injuries will be rare or non-existent.

It’s important to note where effort is concentrated in moving from one system to another. When moving to compliance from non-compliance, all effort is focused on reducing negatives (non-compliers) and management shoulders the entire burden. Not everyone can participate because not everyone is knowledgeable enough to do so. In contrast, moving from compliance to an ownership model focuses most effort on positive change—creating more owners—and less on the negative. As ownership improves, the ratio becomes more and more favorable. Best of all, team members and their behavior are at the center of the effort.

Once you determine where you are, you must have a means to move confidently in the direction you want. Central to any ownership program is how you handle mistakes and poor behavior. Human behavior isn’t perfect; it never has been and it’s unreasonable to think it ever will be. Even the best people make mistakes, so the most useful way to manage what is inevitable is to treat mistakes as learning experiences.

Unfortunately, most managers don’t know how to do this. In the face of undesirable behavior, they typically respond in one of two ways: permissively or punitively – and both usually lead to even worse behavior. A better response, OCL&Me (Own it, Correct it, Learn from it and qualify to Move on) is a true up-or-out system that addresses the shortfalls of both and uses mistakes as opportunities for growth (Figure 2). 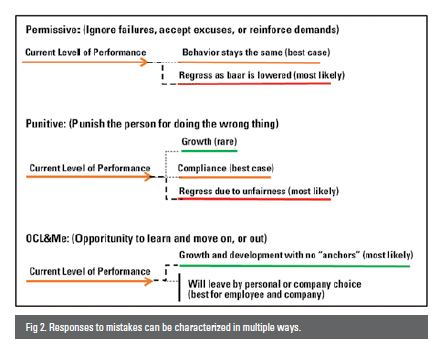 Managers can be permissive in several ways. They can ignore the unsafe behavior or pretend not to see it. This is often done because the act seems relatively minor and if addressed must be either punished or risk weakening the rule. At best this leads to passive acceptance of the behavior and is regressive as both parties know the act has been implicitly condoned and the bar is not in reality set as high as stated.  Another way to be permissive is to accept excuses when the person rationalizes the behavior. The manager may reprimand the employee, but in the absence of any real consequence the message is clear: The standards for what we accept are lower than we say. A particularly sinister permissive response is retraining.  It’s sinister because it provides cover for both parties: the employee is sentenced to re-education and the company responds compassionately in its obligation to properly train. Both parties know, however, this dodges the real issue and future outcomes are predictable. An unacceptable intentional behavior goes unaddressed and will likely arise again.

Punitive is much simpler but equally ineffective. The company sets rules and consequences for violating the rules. If a team member is found in violation, they suffer the consequences. In rare cases this may lead to improved behavior where the violator sees the error of his ways and complies in the future. The more likely response is resentment due to the perceived unfairness of the punishment. It is human to make mistakes, and he knows you have made them, too. Others have done similar things and not suffered a consequence. Because the perceived unfairness breeds resentment, behavior worsens. Only now the unacceptable behavior goes underground as the employee redoubles his effort not to get caught again.

Contrast these approaches with OCL&Me. If a manager observes improper behavior, the first step is to ask the person to explain the situation in their own words. This provides them the opportunity to own their behavior in a respectful exchange between two adults, as opposed to a parent/child dynamic. If the person owns the act, they are also likely to own the outcome and feel a responsibility to correct it as best they can. This sets up an opportunity to demonstrate they have learned from the mistake and grown as a team member. If a team member sincerely goes through those three steps after making a mistake (owned it, corrected it and demonstrated they have learned from it), they have earned the right to move on. That is, truly move on, with nothing hanging over their heads or anchoring them to the past.   On the other hand, if a team member refuses to accept responsibility for their actions, there must be a consequence. This means OCL&Me can be fairly applied in identical situations yet have very different outcomes. The outcome will be based entirely on the response of the individual. It is consistent, fair and flexible and allows mistakes while maintaining accountability. The only forward path is up. This is the outcome which leads to a stronger team.

If you are disappointed with the results of your compliance-based safety program, consider “ownership” as your path forward. And while the concepts discussed here are largely common sense, there are reasons they are not in use in most organizations. It’s essential to identify these reasons so they don’t become roadblocks in your own efforts.

It can be argued the three stages of a safety culture are a natural progression. It is difficult to have ownership before mastering compliance, and compliance comes only after understanding the consequences of non-compliance. While these are logical steps upward, most organizations remain unaware of the next level.

Those in non-compliant systems truly believe employees should just do the right thing. Organizations fully dedicated to a compliance system believe more controls will ultimately do the trick. Only when leadership is convinced of the need for a better way can they move on.

In addition, while these approaches are not difficult to understand, they are neither intuitive nor easy.  In contrast to compliance where good performance can be achieved by properly “checking all the boxes,” safety excellence is no easier to attain than any other form of organizational excellence.  “Ownership” requires training and sustained effort to effectively implement.

Finally, many leaders are alarmed by any perceived challenge to their compliance efforts. Their true view of team members is as less than capable, not as competent adults. As such they must be taken care of and tightly controlled. These leaders may also lack confidence in senior managers’ willingness to hold people accountable and be unwilling to hold those managers accountable themselves. Harboring these views, they are understandably concerned about potential liability in an ownership culture.

Compliance is the foundation upon which ownership stands. Team members must know the rules, safe work practices and the mutual benefits of working safely.

That said, ownership moves compliance out of the sphere of watch, catch, punish and into the sphere of healthy self-interest. And best of all, it appeals to the team members’ highest opinion of themselves.

This article is the second part of a two-part series. Part 1 was published in the April issue of Modern Casting.