Within two years, the gray and ductile iron foundry diversified its markets, doubled its staff and became nearly silica-free.

Since he was young, Mark Soucie has wanted to own and run his own business. After retiring as a business unit CFO at Koch Industries in December 2016, he decided to take some time off and see what opportunities were available. The concept was to lend his CFO experience to a small business that was limited by a lack of time and resources to dedicate to critical matters such as business strategy, risk management, taxes, human resources and banking.

“For small business owners, it is a really difficult thing to invest in a CFO type capability—how do you get a return on investment like that?” Soucie said. “The entrepreneur ends up getting pulled away from what they are really good at, so I wanted to find that opportunity, make an equity investment and then participate in the incremental value and growth of the business.” 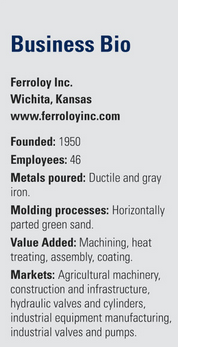 With about 20 employees, AFS Corporate Member Ferroloy Inc. (Wichita, Kansas) was a gray and ductile iron foundry owned by Paul Kolbeck, who made significant investments in the foundry and its machining equipment between 2011 and 2014. But as a supplier to the agriculture industry, Ferroloy was hurt by the downturn that followed a record sales year in 2014. Kolbeck was seeking an investor.

It proved to be a good match.

“Two things helped me make my decision, and I got lucky on a third,” Soucie said. “First thing is the people. I spent time with Paul, Richard Hicks (executive president and COO), Kelsey Bergeron (accounting manager), Wade Engstrom (foundry manager) and Trago Buffington (office and shipping manager) and I could tell their hearts were in the right place and they brought strong capabilities. The second was, identifying a strategy for longer term success that would hinge on our ability to diversify our end markets and become less concentrated in one industry.”

The third factor, which Soucie said he didn’t fully appreciate at first, was the mechanical condition of the equipment.

“Where I got lucky was, even though I knew Paul had leveraged the business, I didn’t realize that our equipment was modern and in such good condition,” he said.

The investment in Ferroloy would be the culmination of a lifelong dream of Soucie, who was planning to buy up to 50% of the company and work with Kolbeck to grow the business. Unfortunately, shortly after their agreement and while Soucie was on a month-long trip overseas, Kolbeck passed away unexpectedly. Soucie decided to go forward and purchase the foundry from the estate, and the sale was finalized in August 2017.

“During this time, we were very transparent with the employees,” Hicks said. “Of course, they worried, and one of the most important things for me was for the people to not feel like it was the end.”

Soucie is grateful the 20 employees on staff stuck with the company.

“That is a testament to the trust Richard had developed with the team, and his communication with them,” he said.

Diversification Begins
Soucie was interested in Ferroloy as an investment because he saw how expanding into different industries could help keep the business from rising and falling with the tides of agriculture.

“Ferroloy didn’t have a dedicated salesperson, so one of the first things we did was hire an industry veteran, John Rockey (vice president of sales),” Soucie said. “We also learned our website needed work. You would Google foundries and we wouldn’t even show up. So that became our next effort. We had to do a better job of communicating our capabilities and identifying potential new opportunities.”

In its beginning, Ferroloy was a captive foundry with a single customer. When that customer went out of business, the metalcaster sought out new customers and being in Kansas, agriculture equipment was a natural fit. The company stayed quietly in business with this approach for decades, which explains why the foundry was largely unknown.

“For the longest time, casting buyers didn’t know who Ferroloy was, and we have definitely changed that,” Hicks said.

“The diversification has been helpful. Valves and pumps are one of the key markets we are aiming for, as it is not as volatile or cyclical year to year,” Soucie said, "and we continue to grow with our ag equipment customers, as well. If it is a high-volume casting, it is going to be hard for us to compete on price, so we won’t try. Our niche is 1/2-lb. to 70-lb. castings in lower to medium lot sizes. We are more comfortable now with who we are and how to leverage our expertise to benefit our customers.”

Maintenance Is Key
One of the areas in the foundry to receive additional staff included the maintenance team. Kolbeck made a significant investment from 2011 to 2014 to double core capacity and triple molding, melting and grinding capacities. A skilled and diligent maintenance department protects that investment and paves the way for future expansions.

“Our maintenance manager Guy Townsend started working here in 2016 and has been chipping away at tightening things up,” Soucie said. “We have made it pretty clear that we view our maintenance capability as a high priority, not only in keeping things running but also knowing when to buy new or when to buy used and rebuild.”

Hicks pointed out a recent example this past winter, when Ferroloy purchased a used sand muller. The maintenance team completely refurbished it, and with the help of two production people, tore out the old muller and put the new one in. The project was done below budget during Christmas break when the foundry was shut down.

“It’s just an example of what they can and are willing to do,” Hicks said.

The maintenance staff’s capabilities will be important as Ferroloy continues to improve its operations. It is currently in the process of adding 12,000-13,000 sq.ft. in order to expand the machine shop, add a pattern shop and remove foundry bottlenecks.

“The foundry is laid out logically: you start at one end and it goes all the way to the other end, but we are going to stretch it out and remove some old equipment,” Soucie said. “That will allow us to add another molding machine, double our melt capacity, add more core machines, add to our shakeout and blasting and move the grinding.”

The building will be expanded, but the larger investment in new equipment won’t be made until Ferroloy’s customers drive the need, Soucie said. When they do, the foundry will be able to meet the demand more effectively.

Soucie’s former career as a finance executive has helped bring Ferroloy into better financial standing. Ferroloy took on debt to triple capacity in the first part of the decade. Since Soucie has taken ownership, he has paid off a portion of the debt and restructured the remaining to reduce the breakeven cost and overall debt burden.

Becoming Silica Free
Ferroloy is investing in its people, too, by enhancing the compensation package and planning to add new locker rooms, a break room and a learning center in the building expansion. The company is also on its way to completing its Safety and Health Achievement Recognition Program (SHARP) certification through OSHA.

“One of the things I’m really proud of is we made a decision a year ago to become a silica-free foundry,” Hicks said.

In 2018, Ferroloy started the process of replacing all the foundry’s silica sand used in making cores with a synthetic olivine sand. The Green Diamond product is a nickel slag sand that is refined and sized and contains no free silica.

Ferroloy introduced the new sand gradually, and it took about a year to get to a point where air sampling test results showed the total crystalline silica well below the OSHA action level of 25 µg/m3.

“We had to learn how to run a green sand system again, because it is totally different than silica sand,” Hicks said. “So, it has been a learning experience.”

Ferroloy went from a 4-screen sand to a 3-screen sand, and the new material requires a little bit more bond. Feedback from customers about the quality of the castings made with the new sand has been positive, Hicks said. The sand is more than twice as expensive as silica and weighs about 7% more, but Ferroloy is exploring some changes to further optimize the system.

“For some foundries, this might not work. If you have too big of cores, it could be too expensive,” Soucie said. “But given our size, it works very well. It may be more expensive (than silica) but with other options you are still exposing your employees, you still have to do the testing, and that’s a difficult cost to quantify.”

The sand was introduced to the system through dilution of Ferroloy’s cores, which are 100% shell. As the sand was added, the foundry closely monitored its molding properties and recalibrated as needed.

“We didn’t know what to expect so we did it methodically and slow,” Hicks said. “But it is a good feeling to know we have done it, and we are helping our employees in the process.”