From Strange to Commonplace

My daughter turned 10 this month, and one of my memories of those first few hours of her life is laughing at how my parents forgot their cameras, so they had to take photos with their phones. It struck me as so bizarre, yet today, it would be weirder if they forgot their phones. In a decade, cell phones grew up from flip devices to personal computers with internet access and high-resolution camera functions. That’s not quite as amazing as my daughter, but it is incredible in its own right.

Advancements in the metalcasting industry can happen just as fast, especially once a turning point has been reached. Last month I attended the SME Rapid Show, which this year was billed as a 3D, additive manufacturing event. It had been a few years since I last attended, when it was still labeling itself as a rapid prototyping show. Five years ago at RAPID, I would get questions like, “Why are you here? Isn’t 3D printing going to put foundries out of business?”

The questions were different this year:

“I have a part that I’m printing but I know I need to have it cast so it’s not so expensive, can you help me find a foundry?”

“Do you know which foundries use additive manufacturing?” 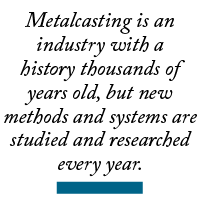 Additive manufacturing has not turned engineers away from metalcasting. For some, the technology is pointing them to the casting process. Those foundries who are targeting customers with low volumes or complex development projects will benefit from offering additive manufacturing as a capability. These customers are looking for places that can pour 3D printed molds and have the ability to print or acquire 3D printed molds.

Throughout the last five years, I’ve seen industry respond. More and more foundries are adopting it as another tool to use to serve its customers better. AFS added an Additive Committee to its technical council, which in part spearheads further research and development in how the industry can best apply the technology. It is a popular topic at metalcasting conferences and had its own line of presentations at the most recent Metalcasting Congress in Atlanta.

3D printing is just one example of new technology that has made its way to a metalcaster’s toolbox. It’s fun to imagine what attitudes will have changed in the next five or 10 years. Perhaps the use of automation and robotics will go through a significant evolution as it becomes increasingly harder to find workers.

Although metalcasting is an industry with a history thousands of years old, new methods and systems are studied and researched every year by AFS, universities, and other industry organizations and institutions. What we are tempted to scoff at today could be industry standard in 10 years, and early adopters will have the advantage. So keep those business minds open and continue to encourage and support the metalcasting research community.

Click here to see this story as it appears in the June 2019 issue of Modern Casting.