The aluminum foundry installed a unique degassing system with a calculated payback of 6 1/2 months.

A rotary degassing unit outfitted to perform periodic grain refinement treatments in A356 aluminum via a cleaning and grain refining flux was implemented into a continuous treatment well in a melting furnace, launder, pouring well foundry floor plan. The implementation of this project brought various benefits over the first few months:

The foundry melts its metal in one of two large 3,500-lb. stack melting furnaces (melt rate capacity of 3,000 lbs. per hour) and transfers metal throughout the foundry as required. In the permanent mold foundry, metal is transferred via a 450-lb. ladle from the main melter to a low-pressure furnace.

Similarly, metal is transferred via the same size ladle from a stack melting furnace to a holding/dipout well for the sand molds made on the two molding lines supporting holding furnace No. 1. Unlike the permanent mold foundry, these sand foundry dipout wells feature an electromagnetic pump that assists in pouring metal into each of the casting molds.

The setup for molding line No. 2 differs greatly from those on lines supporting holding furnace No. 1. The holding/dipout well for molding line No. 2 features the same electromagnetic pumps to handle pouring the castings; however, melt transfer is accomplished via a launder with a plug cone that is released to allow metal to flow from the melter into a launder and subsequently, into a treatment well. From the treatment well, where the aluminum was historically rotary degassed with generated nitrogen, the aluminum flows under a hood with electric glowbar heaters, through an inline particle grit filter and into the holding well featuring the electromagnetic pump. These differing methods for transferring metal require different techniques for properly treating the aluminum. A schematic of the melt furnace, launder and holding well floor plan is provided in Figure 1.

The historical method for treating metal in the launder well was to add metallic form TiBor grain refiner (10%Ti, 1%B) along with any required additions of Mg or Sr into the degassing cell during fill. The exact amount of each addition was determined by chemistry, as every melt charge was analyzed chemically with an onsite spectrograph. A Ti level of 0.14 to 0.16% was the typical target and typically 2 lbs. of metallic TiBor puck were added to achieve these targets. Degassing was typically done in the treatment well of each holding furnace and was accomplished with a simple hoist mount rotary degassing unit. Cleaning with salt fluxes was typically done only during the off shifts to assist with keeping the holding furnaces clean of oxide buildup. Cleaning fluxes (approximately 1 lb. additions) were used to assist with oxide control by sprinkling it slowly onto the aluminum in the launder right before the aluminum exited the launders filling the transfer ladle.

The Experiment
The degassing unit (Figure 2) was mounted on a slewing bearing so that it could be easily rotated in and out of application manually as opposed to the old rotary degassing unit that was placed/removed via an overhead hoist.

The metal treatment station was outfitted with a cooling fan to avoid overheating of the bearings and was set upon a pedestal that swiveled at the height of the pouring deck. The unit had a hopper to hold the grain refining flux and an auger drive system to deliver precise amounts of the flux required. The unit had to be outfitted with a custom retractable baffle plate guard to overcome some overhead clearance issues. Finally, the unit’s control panel was mounted remotely for more safe operations than the preceding unit, which had the controls mounted directly to the unit.

Once the unit was in place, efforts were taken to verify the effectiveness of the vortexing system with respect to grain refinement. Like the methodology used earlier to assess and convert the low-pressure foundry to the salt form flux, control samples were poured to determine the grain fineness and eutectic structure levels achieved with the incumbent process.

With the aid of the thermal analysis system, it was determined an addition rate of 1 lb. of the grain refining flux set at an RPM of 770 and allowed to vortex for 35 seconds after addition would indeed generate perfect grain refinement (9.0 as measured on the thermal analysis unit). With the aid of both a reduced pressure test and a novel in situ hydrogen analysis system, it was confirmed the hydrogen levels achieved were equivalent or lower than those levels achieved by the incumbent process.

The results of the first day of thermal analysis testing after implementation of the grain refining flux with the metal treatment station is listed in Table 1.

After confirming the ability to generate a grain fineness of 9 as measured by thermal analysis, efforts were undertaken to determine the required frequency of treatments. Because the line poured some molds with pour rates of 23 lbs., while other molds contained pour rates of only 12 lbs., all at the same number of molds per hour, it was considered different casting jobs might require different treatment frequencies.

After two days of thermal analysis evaluations, it was determined that treatments (1 lb. of grain refining flux) every 40 minutes during production provided the best combination of achieving perfect grain refining while minimizing spend, regardless of whether the highest casting weight job was running, or the lowest.

Results
The results of the two-month evaluation were a success. The subsequent two months of impregnation charges were $284 and $15. These are much lower than the historic average of $1,568.50 per month average. Additionally, the spend in grain refiners was reduced by $276 per day plantwide on an average of 20,000 lbs. of grain refined aluminum poured per day. At $276 savings per day, this would represent annualized savings to the foundry in excess of $69,000 per year at the current production level of five full days production per week, one shift production. 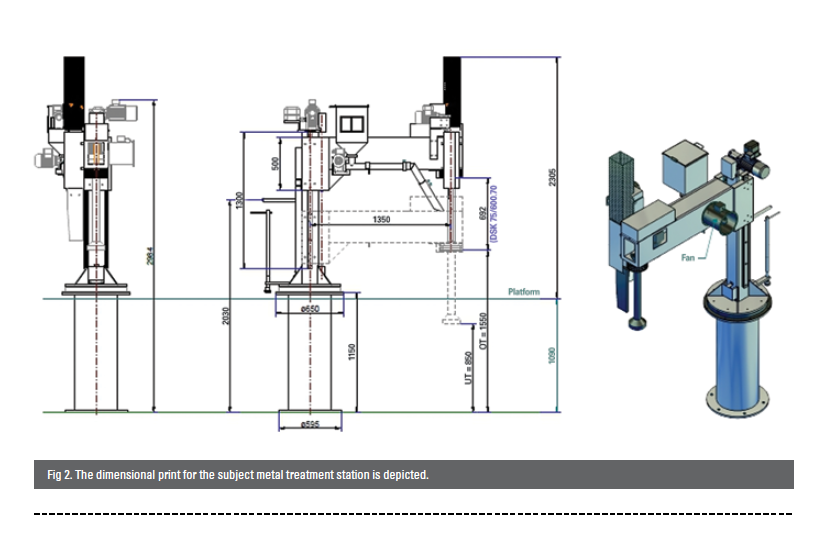 A few tangible considerations were observed with the newly adapted procedure as well. The first tangible benefit observed was the holding furnace was much easier to clean, especially the corners and walls. This was attributed to the flux reacting with the oxides and the reaction product floating to the top to be skimmed.

On the flip side, the floated reaction product would sometimes come up in the furnace heating zone where it cannot be readily skimmed. In this case, the flux byproduct can crust over if left for extended times un-skimmed, so the frequency of cleaning the heating zone of the furnace every evening become more important. It was also noted that the submersed pump filter plugged more quickly (from 4 weeks to 1) with the new system. This more rapid plugging of the filter is attributed to grain refiner agglomeration on the filter. The additional filters required per year is expected to increase filter spend by just over $6,000 per year.

The results help demonstrate that metal treatment station additions of a salt-form grain-refining flux can be successfully implemented in the treatment well of a continuously flowing melt. The implementation of the continuous well grain refinement treatments can result in highly favorable benefits to the foundry. The result of this improved grain refinement resulted in the following benefits:

The calculated payback of savings realized when factoring in the lower grain refining spend, the lower impregnation charges, the lower flux cleaning flux spend and offsetting it with the slightly higher spend on filters is just over 6 1/2 months.

This article is an adaptation of paper 19-015 presented at the 2019 Metalcasting Congress in Atlanta.

Click here to see this story as it appears in the September 2019 issue of Modern Casting.