Using a Team to Save Energy

There are multiple ways to save energy in a plant. Sometimes it is an engineering project to install new lighting. Sometimes it is a combination of management and purchasing departments working to be in a demand response program. One of the best ways is running a team project. Team projects give you the benefit of varied viewpoints (production, maintenance, engineering, etc.) and buy-in. Being involved in finding solutions to problems means you are more likely to support the change. Team projects can be run in several ways.

Gemba Walk
While some plants perform regular gemba walks, few are directly tied to energy. A quick event can be run with a team. After a short training period, a team can walk the plant looking for energy waste. This can be lights on where no one is working, compressed air leaks, furnace doors left open or hydraulics left running when there’s no production. The team can make a list and prioritize the improvements. The important (and often missed) part is to follow-up after the event to make the recommended changes. 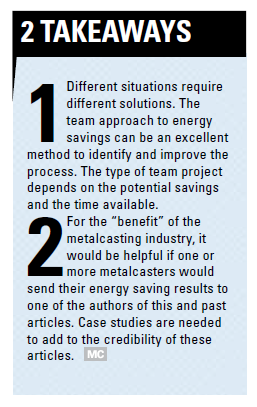 aizen Event
For more energy savings, a week-long event can both identify savings and implement as many as possible. Initial work includes identifying a project. This could be a specific furnace or line versus a large department. The team should at least include personnel from engineering, maintenance, and production. The week should include training on Kaizen methods, a walk to identify issues, ranking potential improvements, and then implementing as many changes as possible. In one event, a large melting furnace was examined. The team improved the preventative maintenance and critical spare parts along with optimizing the burner system for 3.4% energy savings.

Recommissioning
This term is typically used for buildings, but it also can apply to a furnace or production line. Over time a process becomes sloppy and equipment wears out. A team can review the process to bring performance back to the original status or even better. In this case, having a representative from the vendor can greatly help. In one example, a melting furnace was studied. During the week, the vendor gave training, the furnace was examined, a list was developed of needed changes, and work was started. Over 70 items were identified including better platforms, new cleaning tools, door maintenance  and improved documentation. This project required several months to complete the action list, but the results were over $150,000 per year in energy savings alone.

Six-Sigma Team Projects
The ultimate team project is a 6S team. With a Green or Black Belt leader, the team works through the steps of Define, Measure, Analyze, Improve, and Control.

These projects can take several months or even a year to complete, but the savings can be significant. In general, energy savings are obtained through process improvements without the requirement for new equipment.

Some examples of work done during 6S projects:

The drawback to 6s projects is the time required. In one case, the project had to be halted when turnover in personnel decimated the team. In another, the measure phase took over a year and progress stopped.

The core of an Energy Treasure Hunt is an onsite three-day event in which cross-functional teams of employees identify day-to-day operational energy efficiency improvements. Treasure Hunts also enable employees to build a culture of continuous improvement for implementing energy control measures that reduce use, costs, and associated greenhouse gas emissions.