The marijuana legalization movement has grown, and some states now not only permit medical marijuana but also recreational marijuana. What does this mean for metalcasters’ drug policies?

As of Jan. 1, 2020, marijuana is legal in 11 states and the District of Columbia for adults over the age of 21, and medical marijuana is legal in 33 states. Meanwhile, the drug continues to be illegal under federal law. What does this all mean for the workplace? And what are employer obligations when workers use marijuana in these jurisdictions?

The 2019 Littler Mendelson Annual Employer Survey of 1,331 executives, in-house counsel, and human resources representatives asked what keeps them up at night. The second most common answer was the legalization of marijuana. In response to new weed laws, 6% in the survey had dropped marijuana testing altogether, while 5% added marijuana testing.

In the manufacturing industry, the rates for positive drug tests have increased since 2015.

In states with medical marijuana programs, marijuana is offered as treatment for long-term conditions including pain, which is what many opioids are prescribed for. Currently, up to 90% of patients in state-level medical cannabis programs list chronic pain as their qualifying condition.

Marijuana contains the chemical compounds known as THC and CBD. THC is the ingredient that leads to feeling “high,” while CBD is said to have positive medicinal effects. The 2018 Farm Bill redefined marijuana as any plant that contains more than 0.3% THC.

Americans are increasingly seeing marijuana as a short-acting way to feel good or get high without long-term consequences, as is reflected in the trend for states to legalize its use. Whether or not the drug is as benign as they hope, marijuana and marijuana products are here to stay.

Federal Vs. State Law
In the jurisdictions that have enacted laws permitting marijuana to be used recreationally by adults, the use and possession of marijuana and marijuana products is not considered a state crime and users won’t be arrested or charged if they are using it according to state law.

Federal law says marijuana is still completely unlawful. The federal government has the authority to raid marijuana dispensaries and arrest those who sell or use marijuana, and the drug is listed as a Schedule 1 controlled substance along with heroin, LSD, and ecstasy.

The Americans with Disabilities Act allows employers to discharge employees engaged in the current use of illegal drugs, meaning employees are not considered disabled  when they engage in the illegal use of drugs and employers can discipline employees on that basis. There are a few prescription medications that contain THC, and workers who use these THC-containing drugs by prescription may be protected under the ADA. However, because medical marijuana programs are not lawful as a matter of federal law, the use of marijuana pursuant to a state marijuana program is treated differently under the ADA than the use of medications approved by the federal government which contain known quantities of THC and which can be prescribed.

U.S. Dept. of Transportation regulations cover more than 8 million private-sector workers. Marijuana use of any kind is prohibited by the DOT, including CBD products containing THC.

When state medical marijuana laws first began to be adopted, a key question was whether individuals have a right to be free of discrimination by their employer based on their use of marijuana? Early court decisions uniformly answered that question, “no.” States like California, Colorado, Oregon and Washington concluded they could require employers to accept employee marijuana use, leaving those employers free to decline to hire or employ workers who use marijuana.

As in Massachusetts, 15 other states have adopted some sort of statutory protection for medical marijuana program participants. These laws vary greatly from one another, but in these jurisdictions, you may have to treat medical marijuana users differently than your zero-tolerance policy requires. However, it is always acceptable to prohibit workers from bringing marijuana and marijuana products to work, from using those products during the work day, and from coming to work impaired.

New Jersey, New York, Massachusetts, and Nevada all treat medical marijuana users as protected by state disability law. A few states have specific carve-outs in their statutes for people who work in safety-sensitive occupations. In other states, it is unclear if there are exceptions.

Finally, although recreational marijuana users are not typically protected from adverse employment action, that may be changing. As of January 1, Nevada no longer permits employers to turn away applicants who test positive for marijuana, unless the position sought is safety-sensitive, and New York City is poised to implement similar restrictions starting in May.

It’s important to know what the law is in your jurisdiction and think about what your policy will be with the understanding that if individuals will be treated as disabled you probably need to give them an individualized assessment regarding their role in your organization.

In the Courts
Are there risks to remaining ignorant of the law in your jurisdiction?  In a recent case from Connecticut, an applicant was extended an offer but had to pass a drug test. She disclosed that she was a medical marijuana patient and would test positive. The company allowed her to start working prior to receiving the test results. When she tested positive for marijuana, they fired her. The Connecticut statute provides that unless federal law directs the employer to do something else, an employer cannot refuse to hire someone solely based on their status as a medical marijuana patient.

The employer argued the state law was preempted by federal law, citing the Controlled Substances Act, Americans with Disabilities Act, the Food Drug and Cosmetic Act, and the federal Drug-Free Workplace Act. It also argued it did not act on the basis of her status as a patient of the Connecticut Palliative Use of Marijuana Act but because she tested positive for marijuana. 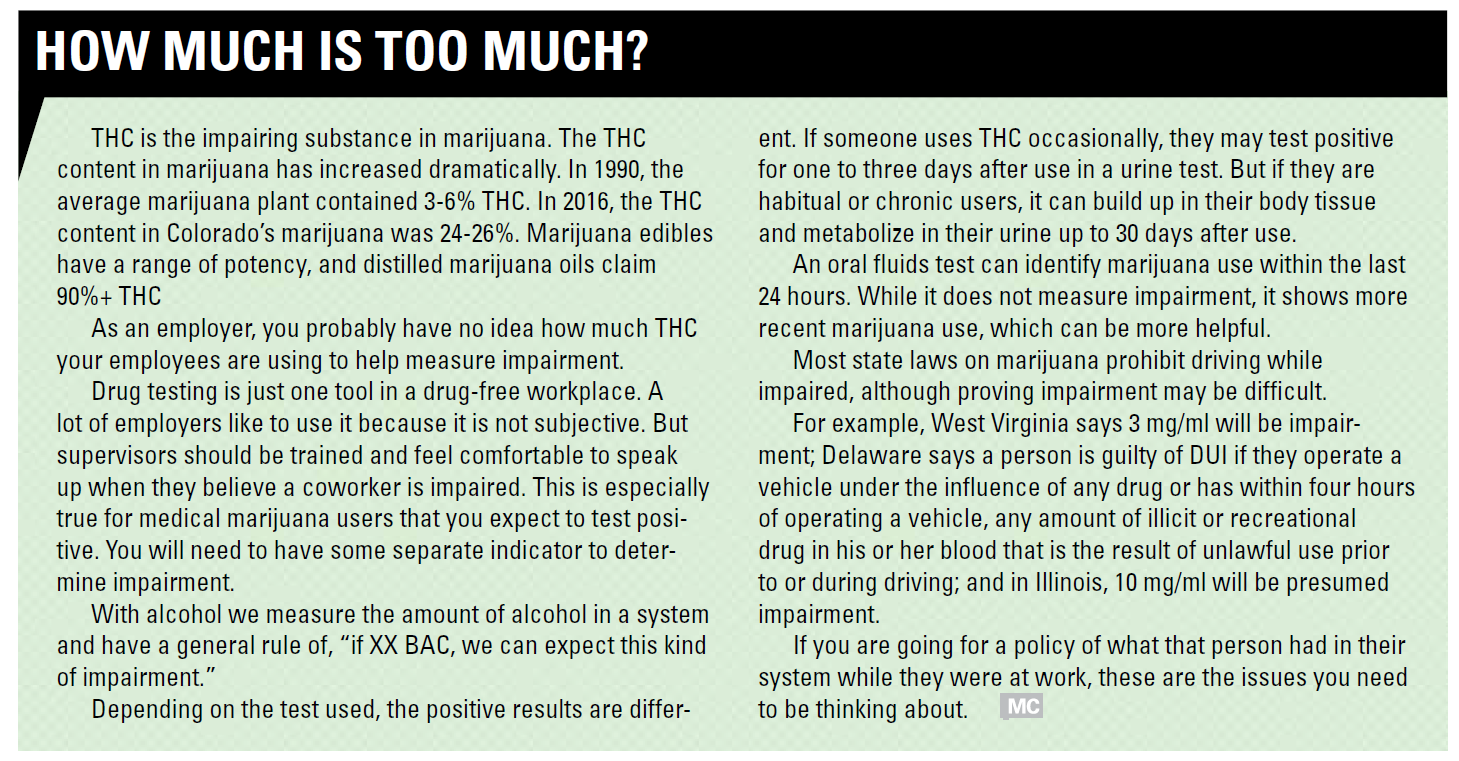 The court said the CSA and FDCA do not regulate employment practices, and the DFWA does not require drug testing; rather, it requires an employer to discipline workers who use or possess illegal drugs at work. Further, it held the ADA permits employers to prohibit illegal drug use at work, but it does not permit employers to use a negative drug test as a universal qualification standard.

The court then ruled that action based on a positive workplace drug test for marijuana constitutes status-based discrimination when an employer knows the result was caused by marijuana use lawful under state law. Summary judgment was awarded to the plaintiff.

What does this mean? It is risky to enforce a zero-tolerance policy that is premised on federal law if you are in a jurisdiction where state law offers additional protection to marijuana users.

Final Pointers
Whatever you do, stay on top of changes in the law of the jurisdictions relative to you. Be open to working with marijuana users in states that so require.

Stay flexible and accept that the approach will not be uniform across jurisdictions or even within a single location. Consider using individualized evaluations akin to ADA standards. Individualized accommodations mean different outcomes for different individuals filling different roles.

Train supervisors so they don’t shy away from reacting to perceived impairment. They don’t have to accuse someone of being stoned, they can simply say they appear not to be their normal selves when investigating these concerns.

If your workforce is federally regulated, however, do not ignore a positive marijuana test.

Document your decisions to hire, not to hire, and to accommodate individuals. It is much better to conduct an individualized review of requests to accommodate marijuana use than to enforce a firm rule if you may be called upon to defend that decision.

Finally, train your workers on your policy and prioritize safety.

This article is based on an AFS Members Only webinar. Members can watch the full recorded webinar at www.afsinc.org.

Click here to see this story as it appears in the February 2020 issue of Modern Casting.