Green Sand Emissions and the Concentration of Carbonaceous Additives

A replacement of seacoal with causticized lignite has the potential to reduce foundry emissions.

The benefits of adding finely divided bituminous coal, commonly known as seacoal, or other carbon rich additives to clay-bonded molding sands have been well established by the foundry industry to generate air emissions. Hazardous air pollutants (HAPs) and volatile organic compounds (VOCs) are generated and released during the metalcasting process because of the pyrolysis of the carbonaceous additives in the molding sand.

In general, organic substances produce volatile gases and deposit a solid residue enriched in carbon after pyrolysis. This pyrolysis of carbon containing materials has generally been accepted as serving several essential functions in green sand castings as summarized in publications as far back as 1980. The generation of volatile gases from the carbonaceous material promotes a reducing environment in the mold cavity helping to inhibit the oxidation of the liquid metal. The pressure generated by the volatile gases, in addition to the carbon rich residue deposited during pyrolysis, helps resist metal penetration and promote good casting finish while aiding in the peel of the solidified casting from the sand mold. The gases that are evolved from the carbonaceous material exposed to high temperatures in the sand mold contain VOCs and HAPs and have been shown to be major contributors to overall foundry air emissions. 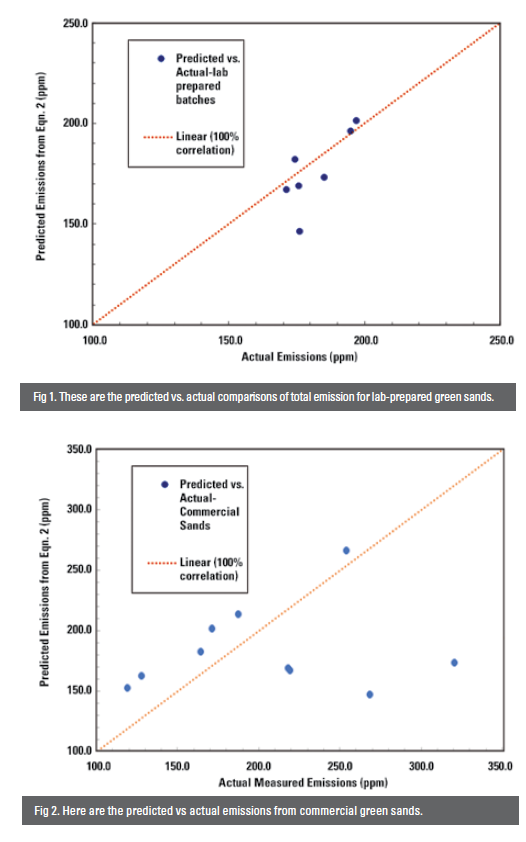 With the introduction of the Clean Air Act in 1990, the foundry industry has worked to reduce the emissions impact from metalcasting processes. One such approach to emissions reduction that has been adopted with some success has been replacement of seacoal with lower emitting substitutes such as causticized lignite. Studies have been conducted to show the potential reduction of emissions as a result of this replacement. One such study showed that substitution of seacoal with causticized lignite showed a substantial reduction in VOCs and HAPs while maintaining good casting finish on the test pieces. Since that particular study, many foundries have adopted this approach by including some amount of causticized lignite in their bentonite pre-mix.

Foundries can monitor their VOCs and HAPs emissions through sampling and testing of their waste gases through approved sampling and testing methods typically known as stack testing. Pyrolyzer Gas Chromatography Mass Spectrometry (pyrolyzer/GC-MS) analytical technique studied here can potentially serve as a tool to predict emissions response from the green sand component of the foundry. This could address a need in the foundry industry as it has been shown in other studies that traditional laboratory tests such as determination of volatile combustible matter (VCM) and loss on ignition (LOI) are not statistically significant factors in predicting foundry emissions from green sand. Lab pyrolysis testing may prove to be a more significant predictor of emissions generated from green sands, although further studies are required to determine any correlations.

A experimental design (DOE) was conducted to estimate any main effects and/or interaction effects that exist between the amount of seacoal and the amount of causticized lignite a bentonite pre-blends used to prepare molding sands.

The test matrix was replicated at least three times. The results of the experiment were entered in the commercial DOE software and two-way ANOVA was performed at a 95% confidence level. The statistical software advises that the model overall is statistically significant based on the F-values and p-values. The F-value for each term was high, indicating the variation between the groups in the design was much higher than the variation within the groups of the design.

When the F value is larger than a predetermined F value based on the degrees of freedom for the terms between the groups and within the group, the term is considered significant. The interaction term AxB was removed from the model because it was not significant. The correlation coefficient for the model (R2) was 0.965, indicating the model can account for approximately 96% of the variation seen in the total emissions response as a function of the percentage of seacoal and causticized lignite added to the pre-blend. The ANOVA results for each of the nine individual compounds showed statistically significant models as well and indicated both % seacoal and % causticized lignite in the pre-blend are main factors while the interaction effect between seacoal and causticized lignite was not significant in predicting the variation in the total emissions response. The R2 values for the individual compounds ranged for 0.822 to 0.986.

ANOVA analysis for the mechanical green sand test responses results did not show any statistically relevant relationships between any of the responses and factors. In each case, the F-test values were very low indicating the variance between the groups in the experimental design did not differ significantly from the variance observed within the groups. The p-values were also all very high, above 0.05, indicating the variation in data was not adequately explained by the factors. This was not unexpected since commercial formulations with varying ratios of sodium and calcium bentonite was used for this study and this is known to be more predictive of certain mechanical properties

The coded prediction equation generated from the statistical analysis of the variance is shown as Equation 1.

The uncoded prediction equation shown here indicates that a substitution of 3-5% of the seacoal with causticized lignite could yield a potential reduction in emissions between 9-15%.

The normal plot of the residual analysis generated by the DOE software provides further confirmation of the significance of the model. Equation 2 was used to predict the emissions for additional lab-prepared green sands which were compared to the measured values (Fig. 1). The model predictions were within 5% of the measured value for five of the seven confirmation test batches. 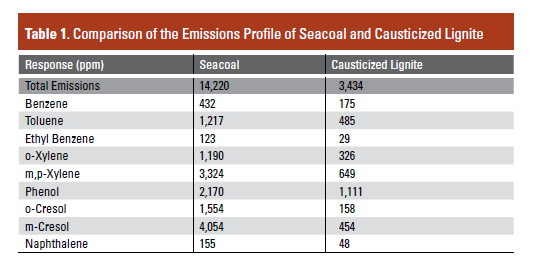 Additionally, Equation 2 was applied to predict the emissions results of 10 commercial foundry green sands available in the laboratory (Fig. 2). The agreement between predicted and actual values for commercial green sands was lower than with the labprepared samples. This was somewhat expected. Many other variables that can contribute to green sand emissions were not addressed in the experimental design, such as core sand concentration, additional carbonaceous sources (e.g. gilsonite), parting sprays, and mold coatings and washes.

Conclusion
The pyrolyzer/GC-MS analytical technique is an effective indicator in predicting the potential emissions output from the seacoal and causticized lignite component in a bentonite-based pre-blend.

The DOE methodology used in this study indicated both seacoal and causticized lignite are main factors in modeling the total emissions generated from the green sand sample, but no significant interaction effect was observed.

The model generated from the statistical analysis of the emissions results indicates it is statistically significant and confirmation tests with lab prepared green sands showed reasonable agreement between predicted and actual values.

The model developed in this experiment was less robust for the prediction of emissions of commercial green sands. This was not unexpected given that other factors contribute to green sand emissions, such as resin coated core sands. An additional DOE incorporating organically bonded resin sand additions to green sand mixtures will be considered to improve the predictive capability of the model.

Another possible approach would be to evaluate commercial foundry stack testing results against emission results from foundry green sand in the laboratory to determine if any trends can be observed over time.

This article is adapted from paper 19-082 that was presented at the 2019 Metalcasting Congress in Atlanta.

Click here to see this story as it appears in the December 2019 issue of Modern Casting.